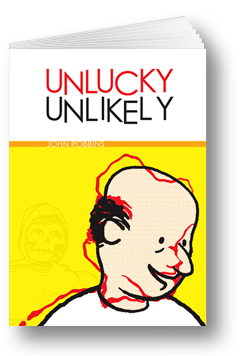 Caught in the orbit of a near-life experience, Tallaght-man Tom Bennett is hurtling toward a hard truth or two. For this spacer, the star wars are well and truly over.

About the Author
With titles such as Negotiating The Beast and Sad Chemistry, John Robbins has been luring slice-of-life comics into uncommonly-familiar territory since the nineties. He has published both comics and prose short stories in several magazines and anthologies - most notably Emerald Eye: The Best Irish Imaginative Fiction (Aeon Press, 2005) - and has worked as a letterer for US comics imprints such as Dark Horse and Bluewater. Unlucky Unlikely is his first graphic novella.

In Bits
A Collection of Short Comics by
Philip Barrett

In one way or another the characters in these short stories could do with pulling themselves together.

About the Author
Philip Barrett has been self-publishing comics since 2001, including writing and drawing 9 issues of his catch-all title Matter and contributing to numerous anthologies. His illustrations and comics have appeared in publications as diverse as Rabble and the Irish Times. Philip helped get the ball rolling on the regular Dublin Comic Jam.

In Bits by Philip Barrett 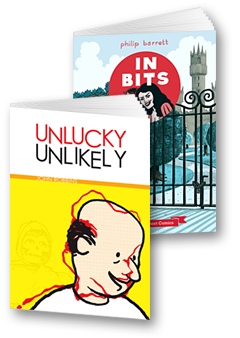 To celebrate the launch of the first two titles from Blackshapes books, for a limited time get both books plus a personalised note* for a special price. 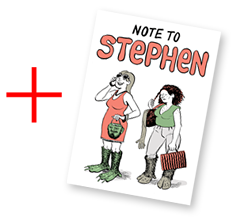 *The note will include your name plus an A5 black and white ink drawing of the artist's choosing. Special requests may be taken on board but not necessarily acted upon.

See here for myriad samples of past notes.

Books as above plus personalised Note